Anticipating high winds today, we ventured out early this morning to walk around one of the better birding places in area just west of beautiful downtown Arivaca.

Anticipating we would see some little birds, I decided to try out the big 200-400mm zoom lens and camera. S had returned from Oregon with it's strap and assembled on the lens which weighs 8 pounds (11 with camera). I was excited to head out in search of prey to shoot (with my camera of course). I shot most of these at 560mm fully zoomed in with 1.4 extender enabled. Most were 1/1000 or more, ISO 1000 or so. F5.6.
Note: that these photos were all jpg's processed on my iPad so they aren't as rich as usual. Check my flickr page for some better ones.
As we began our walk we spotted a couple Kestrals high up in the cottonwood tree, their backs to us. As we cautiously approached they looked around, the finally the male Kestral darted over to the female and before I could raise up the camera to shoot, the mating season was over. He flew off to have drink wiht his mates no doubt, while she put her herself back together and adjusted her makeup before flying off in search of a nest.
{Photo of kestral to go here.}
Further along the path we heard the melodious sounds of a Bewick's Wren. He darted all around us, eventually landing in a high snag where I finally shot him singing merrily away. S remarked with wonder as to how so much joy and beautiful song could be sustainably emanating from such a little tiny creature tinier than a housefinch.

My mistake was not taking the monopod because, upon viewing some of the photos, I immediately saw they were not as sharp as I could have liked. As we strolled, ever so slowly, around the trails of this refuge, we saw at least 15 different species.

Photographing little birds is difficult. They hide in the thickets and behind trees. ID through binoculars easier but catching them in open to photograph takes patience. I was hunting a green tailed Towhee for 20 minutes and finally spotted him out in open (see shot below) where is flitted for a bout 4 seconds. Just enough time to raise up the camera and photograph into the darkened woods.

Even a pair of Coyotes hunting the tall grass for breakfast. We happened onto this pair out in the tall grass. Heard them yipping and digging and scurrying around. They didn't see us at first but when I popped off 4 shots in quick succession, the noise made by the high speed camera clicking alerted them we were present and they bounded off. This shot below was the only decent one I got and then some tall grass blurred its face a little.

We saw these really cool butterflies, too. Can't you tell I don't know butterfly names? They fly fast and dart around in the Willow trees so it is hard to catch them. Finally one landed to feast all alone on the willows seeds and I was able to get a decent shot.

A fun 2 hour walk. next time I bring my Monopod.

This bee in search of lunch

Tohono Chul in Tucson, Arizona, USA,  has some pretty cool places to photograph. i shot this garden vase diagonally with water flowing all around it.

Recently made a visit to southern Nevada’s oldest State Park where I found this interesting formation.  Wow. We called it “Elephant-ette Butte”.  The state park has Elephant butte on east edge which is not as interesting.  this one hard to find with a 1/4 mile hike off the road. 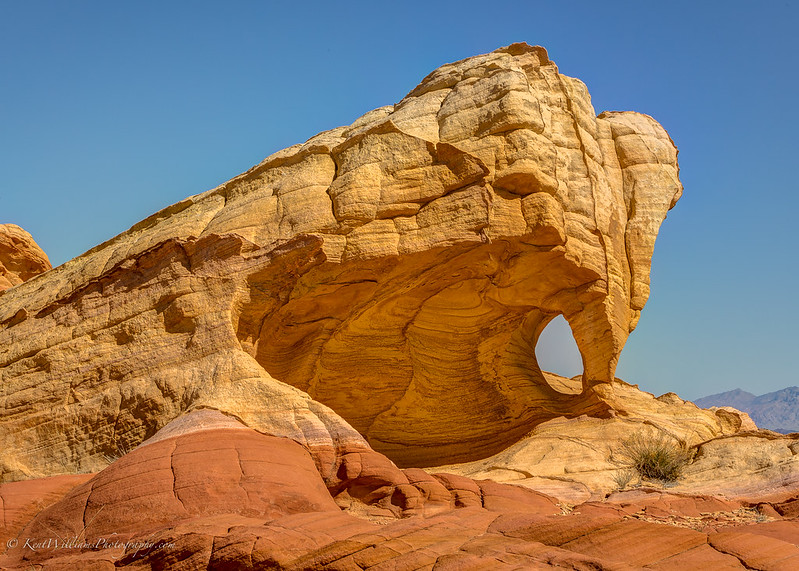 This beautiful mountain lion peaking out from his perch.

Sunset on the Umpqua River as storm waves crashed on the beach. I shot this with my new 200-400 zoom lens handheld

Every morning, every evening, you see these beautiful blue heron’s near the water’s edge patiently waiting for food to make the mistake of showing themselves and snap! Meal served.