Make sure you watch the video at the end of the blog.

Late June I took a little drive up to Portland and Seattle with a stop over in my old home area of Walla Walla.  Got a chance on the return trip to stop in Olympia to see my longtime model railroad buddy Jim.  Instead of running model trains we decided to go out to Steilacoom on puget sound just south of Tacoma, Washington and watch trains.  Maybe even get some aerial footage with my DJI Mavic quadcopter.

We parked near the Anderson Island ferry dock in Steilacoom and walked along the tracks to find a spot in the shade.  It was warm outside.

We saw a northbound Amtrak and a coal drag.  Listening to the scanner on the iphone we figured out which milepost detector was triggered when the train goes by and could mostly discern whether it was northbound or southbound.  I flew around about half mile out in the sound and shot some footage of the ferry’s and the trains.  Had to figure out which neutral density filter to use.  Think it was ND8 most of the time which allowed me to shoot at 1/50 shutter speed.

Then we moved up to Titlow beach just south of Tacoma Narrows bridge.  As we were driving along the sound I stuck my iPhone out the window to catch some video footage of a train going by.  (Don’t tell my spouse I did this!)

At Titlow beach we did scout a potential takeoff point, however there was just too many people for my tastes.  We did catch a train go by with my iphone All this is in the video below.

As the sun began to get lower in the sky we headed south to Chambers Bay, site of the 2015 US open golf tournament.  Being a public links course we drove down to the driving range and decided we could launch from there.

We saw several trains and got one good long video as a northbound garbage train passed by just as i was running out of battery.  Was way out over sound about 3/4 mile away when it passed and was down to less than 20% battery by end.  Whew.

Below is a link to the 10 minute video I created from footage.  Some of it was speeded up to get within the 10 minute limit I set but it was still a 1.5 GB size.  wow.

Oh yes,  I did also see the Southern Pacific tourist steam engine in Portland.  That’s in the beginning of the video below. Hope you can enjoy.

Afterwards we retired to a local pub for a bit of nourishment. 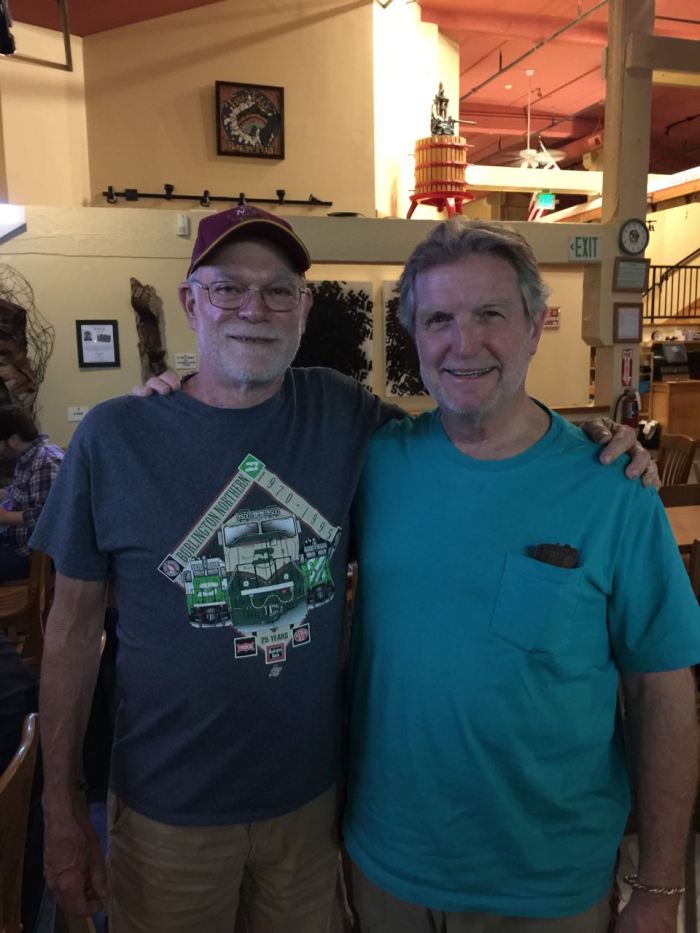